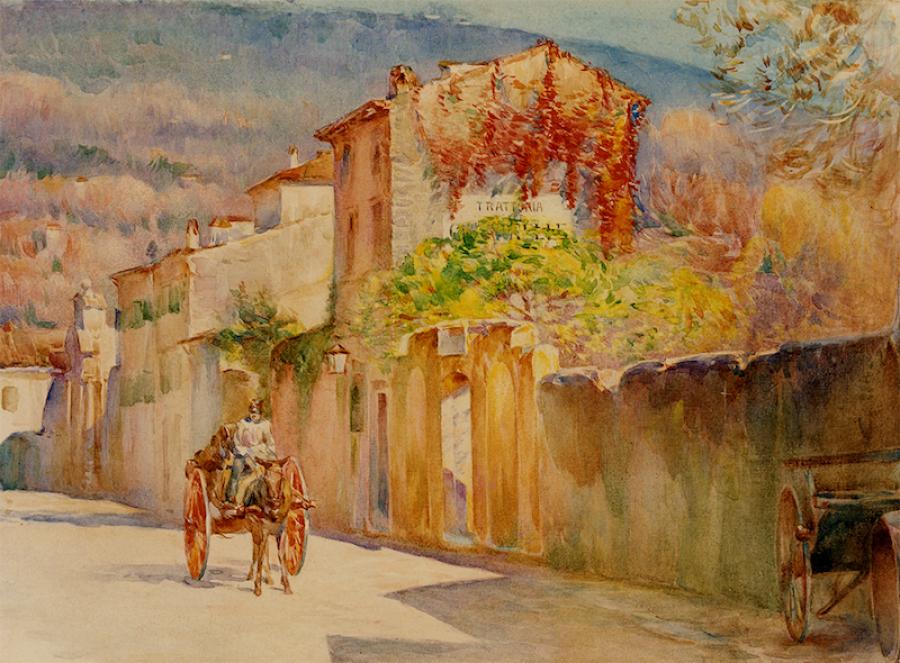 The Happiness of Painting. The exhibition of Edgardo Zauli in Velletri.

Edgardo Zauli Sajani (1874-1944) was truly appreciated by the population of Velletri during his long stay in Latium, so this exhibition wants to unearth the artistic merit of the painter as well as the legacy of a strong relationship with local vicissitudes.

Edgardo Zauli Sajani’s stay in Velletri was not a short one. Moved from Forlì in the 1920s, Zauli directed the local art school until 1935, and has been regularly involved in the set-up of public spaces in occasion of important events such as the entry of Vittorio Emanuele III in 1927 and the inauguration of the Simbrivio aqueduct in 1932.

From his home in Via Castello, Zauli has built a deep relationship with the city. Gaining recognition as “The Artist”, he was valued and appreciated by the whole community.

The catalogue of the exhibition, edited by L’Erma di Bretschneider and curated by Marco Nocca, attentively displays the work of Zauli between Rome and Velletri: from the first prize at the exposition of 1923 for the iron bed creations, to the set-design of silent movies, touching on the illustrations of the Socialist Party cards and the production of the Art School he directed.

In 1943, the ally bombing in Velletri destroyed the studio and home of the artist, who will die the following year in Rome. In 1947, as a symbol of immense gratitude, the body of the painter is brought to Velletri by the will of a group of citizens, in the tomb of a monumental cemetery.

The Happiness of Painting: The Display

The exhibition “Felicità della pittura” is curated by Marco Nocca, also author of the catalogue edited by L’Erma di Bretshneider.

For the curators, the monograph on Edgardo Zauli Sajani is intended to be the second leg of the work that started with Juana Romani (1867 – 1923). The petite italienne was very successful in France and in 2017 an exhibition was dedicated to her in the same rooms that today host Zauli’s paintings.

Open for visits until February, the Happiness of Painting highlights with even more determination the historic value of an institution which had an important role within contemporary art history, such as the Scuola D’arti e Mestieri of Velletri.

The fil rouge followed by the Accademia delle Belle Arti of Rome, promoter of the exposition, is the one tied to the re-discovery of some forgotten leading painters: the art work of Juana Romana and Edgardo Zauli depict an uncommon cultural vitality which has deeply influenced Velletri’s public life in the first half of the last century.

The 47 paintings exposed in the Casa delle Culture e della Musica of Velletri were donated by the Pinacoteca Civica of Forlì, with the common intention to appreciate and recover the memory of an artist which was loved as much as he was unknown.

Zauli’s most famous paintings are also exposed, commissioned to the painter in 1929: The portrait of Vittorio Emanuele III and the one of Benito Mussolini for the royal residency in Forlì.

In the room of the Refettorio del Carmine, the great painting of Azalea stands out. “Ritratto di giovine signora” (Portrait of a Young Lady), which won a gold medal for painting at the exhibition of Forlì in 1907 and that reveals the skills of the painter, a portrait artist whose traits are not far from Decadentist influences.

The artistic and personal life of Zauli is engraved in the four “Autoritratti ad olio” (Oil Self-portraits) that guide the visitor along the rooms of the Casa delle Culture, together with “Ritratto della Madre” (Portrait of the Mother) and to the painting “Il Fratello Giulio” (The brother Giulio)

Very appreciated are the en plen air views like “Arco di Tito“ (Tito’s Arch) and “Casa con Albero”(House with Tree), where the watercolor techniques of Zauli are prominent and symbol of a strong connection to the antique. City paintings are also present, such as “La Strada con carretto a vino romano” (The Road with roman wine Wagon) and “Strada con arco” (Road with Arch), which highlight the strong connection with the city of Velletri.

Known as a solitary artist yet cherished by the fascist regime, Zauli is part of the “forgotten” painters of the first half of the 20th century whose work craves to be remembered: the catalogue of the exhibition reminds us of Zauli through the images of lost pieces, published for the first time in this precious volume.

The catalogue edited by L’erma di Bretshneider, with the participation of various experts, is an accurate interpretation of the artistic and personal life of the painter, touching – through unreleased documents -  the history of the Regia Scuola D’arte of Velletri, placing attention to the years when Zauli’s management led the schools reputation to the European elite.

It is a volume that the curator defines of great scientific importance, for the quantity of documentation work in the appendix and for the reproduction work that focuses on the most striking aspects of the relationship between Zauli and Velletri, which was considered as a second home for the Forlì native painter.