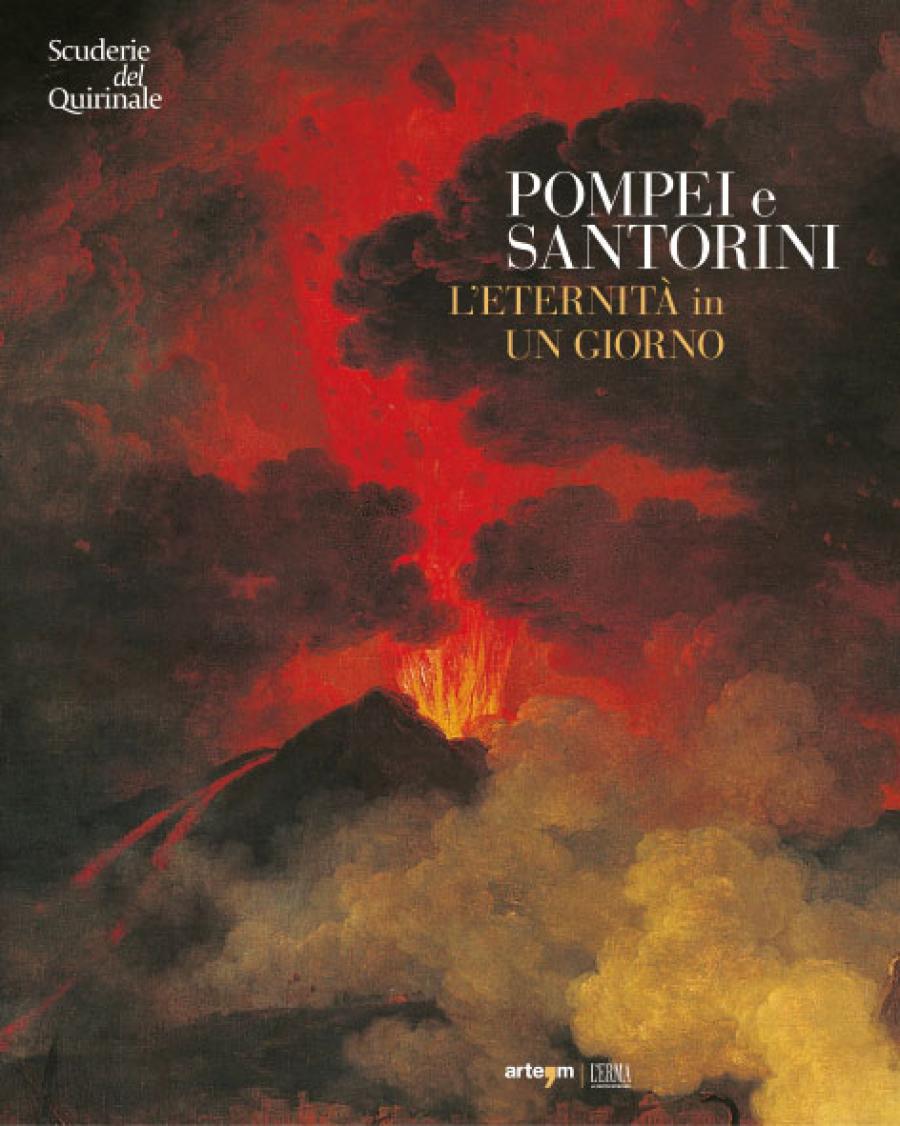 Pompeii and Santorini: Eternity in one day

The exhibition Pompeii and Santorini: Eternity in one day, hosted by Scuderie del Quirinale, will be open to public until the 6th of January.

Pompeii and Akrotiri, settlement on the island of Thera (today known as Santorini), are eternally bound to each other due to their common, tragic fate: both were totally destroyed by the eruption of the two vulcans which were guarding their ancient development as major cities of the Mediterranean.

Akrotiri was a thriving Minoan settlement during the late Bronze Age, when the massive Theran eruption rubbed out its existence in 1628 B.C.; Pompeii was a prosperous Roman colony with a long history, when the eruption of Mount Vesuvius destroyed it in 79 A.C..

Nonetheless the two cities could be assimilated, as splendid freeze frames of ancient history revealing us much of the eternal human feelings of End and Rebirth.

Pompeii and Santorini are bound together by a tragic, common history which come to us with unusual intensity: the one of a precise and detailed snapshot of ancient life captured in the very moment of its annihilation.

The inspiring exhibition will guide you through an itinerary that connects the two tragic events under a unique historical meaning, even though the two terrible eruptions occurred at a distance of 1700 years one from the other.

The archaeological site of Pompeii is well known since 18th century: the excavations of 1748-1863 revealed untouched scenes of the daily life of an ancient world lost under the ashes of Vesuvius, and attracted from the very beginning the attention of european scholars and intellectuals.

It was watching at Pompeii’s scenes, frescoes and paintings that Johann Winckelmann defined in 1764 Neoclassicism, a new artistic movement willing to promote the aesthetic value of ancient Greek and Roman art. In Winkelmann’s theory, the ancient art - as revealed by Pompeii dusty ruins - was the only one to imitate, for it is the only one giving to subjects the eternal image of beauty and harmony.

Pompeii is the most important archaeological site in the world also because the discovery of the italian site has been an important watershed in the history of archaeology, allowing the archaeologists to test new techniques since the earliest stages of the research, in 18th century.

A completely different destiny involved the archaeological discovery of Akrotiri, which was initially revealed in 1860 while working at the Suez Canal but only in 1967 became object of study and further excavations under the direction of the greek archaeologist Spyridon Marinatos.

The ancient Minoan city, destroyed by one of the most terrible volcanic eruptions in ancient history, emerged from the ashes as time never ran through its buildings, its frescos and daily use supplies. For the first time in history, the contemporary eye can see a terrific snapshot of life in late Bronze Age, much older than Pompeii, captured in the very moment of its complete destruction.

Both Pompeii and Santorini allow us to resurrect entire civilizations which were founding myths of Mediterranean ancient history. The main purpose of the exhibition is, in the words of  its curators, to accompany visitors through a journey about destruction and rebirth: the terrible annihilation of the two cities is at the same time the proper reason allowing us to see their precious profile - almost untouched - today at the roman exhibition.

You will find - walking through the halls of the Scuderie del Quirinale - frescoes, ceramics, furniture and everyday supplies from Pompeii and Akrotiri and even some findings never seen before, such as the Oplontis safe box from the island of Thera and the cast of the fugitive found in Pompeii site during the 2018 excavations.

Among hundreds of treasures from an untouched distant past, the exhibition collects works by modern and contemporary artists: J. M. W. Turner, Renato Guttuso, Andy Warhol, Alberto Burri and others accompany the visitor through Pompeii and Thera history with their interpretations and impressions about the fate of the buried-alive cities.

You won’t find bodies or jewels from Thera: it seems that the population of Akrotiri managed to escape from the city thanks to earthquakes warnings, taking away jewelry and precious things. The objects and the paintings from Thera are perfectly preserved though, allowing the visitor to experience the same liveliness feeling handed over to contemporary world by the discovery of ancient Pompeii.

The unprecedented comparison between the two ancient civilizations is built on a recognizable shared fate which openly shows the volcanic fury as a terrible disaster capable of erasing entire cities while giving them eternity.

Eternity in one day

The whole life of Pompeii and Santorini wiped out in a moment. Ideals, beliefs, cultures, customs and arts were all buried under a heavy blanket of volcanic ashes.

Everyone who remained in town were killed in a few moments, as shown by the terrific plaster casts of Pompeii: fugitives, screaming people, others immortalized while trying to cover their face or protecting the younger ones are only a part of the breathtaking legacy of Vesuvius last eruption.

The iconic Pompeii casts were obtained during early excavation, thanks to an intuition of Giuseppe Fiorelli, the italian archaeologist who was in charge of the archaeological research from 1863: he realised that there were some empty spaces under the dust, and decided to inject some plaster into them, recreating the stunning images we know today.

Those snapshots of horror and death still offer us an unparalleled vision of humanity, a vivid image of the very unique moment in which everyone is equal and every feeling converge into a full, sympathetic sense of humanity.

Pompeii and Santorini are bound together by a tragic fate which had the incredible ability to preserve and immortalize a peculiar moment: the one which flushed away centuries of arts and cultures in the habits of the people of the two settlements buried several centuries ago.

The volcanic flood destroyed the living expression of two entire thriving cities, leaving their eternal contours almost intact for the contemporary eyes to watch, study and understand them as the eternity of a moment.

The extraordinary exhibition Pompei and Santorini: Eternity in one day intends to be “a surprising journey back in time that will immerse visitors in History, in Surprise and in Darkness, in Beauty”.

The Scuderie del Quirinale will host this unique collection until the 6th of January. Since its opening in October, the exhibition had only excellent reviews from visitors and experts: it may therefore be a good purpose to visit it, if you’re planning a trip to Rome.

The Official Catalog of the Exhibition published by L'Erma is available for purchase on this page Pompei e Santorini. L'eternità in un giorno